While Liam was in the NICU I saved little things along the way.  Like all the sizes of diapers he had, his little billirubin glasses, ID bracelet, etc.  I have had them saved in a memory box in his nursery (along with his big brothers baby stuff) and realized I wish I had it on display.  I decided to make a shadow box.

The weekend I went to Michaels they had them 50% off! Score!  I then gathered all my stuff and started arranging it in the shadow box.  I think the finished product came out pretty good, check it out! 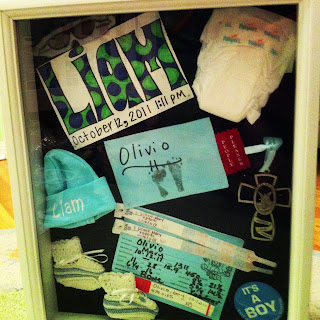 I'm actually now inspired to search through Noah's baby stuff and make him his own shadow box. I'm embarrassed to say that I haven't finished Noah's baby book...he is four. Oops!

Posted by Micropreemie Mom at 5:57 PM

This turned out so cute! I'm sure you will treasure it for many years to come!