Weight gain has been Liam's biggest hurdle.  He was severe IUGR being born at 15oz.  Even in the NICU it took him forever to gain weight so it's no surprise that at almost 15 months he is still in 3 month clothes.  He is tiny but strong!

At our last dietitian appointment we had very low weight gain from the prior 6 weeks but I did mention that he was sick multiple times during those 6 weeks with colds and ear infections. The dietitian suggested and Liam's pediatrician agreed that we will do half 24 calorie Neosure and half Pediasure.  So far he has only had the vanilla and he seems to really like the Pediasure.

This past week we went for his Synagis shot and he gained almost 10.5 ounces in the past month! I know this doesn't sound like a big gain to some but for Liam it's HUGE.  I'm hoping for an even bigger gain when we go to the dietitian in 2 weeks!

We are also working on introducing Liam to more table food.  This is another hurdle as Liam has some feeding issues especially with texture.  Liam is still mostly on purees and will still gag on thicker purees like peas.  We work weekly with his OT on his feeding and he is making some improvements.  This past weekend we gave Liam some grilled chicken in the smallest pieces of course and he really liked it! Baby steps, baby steps. 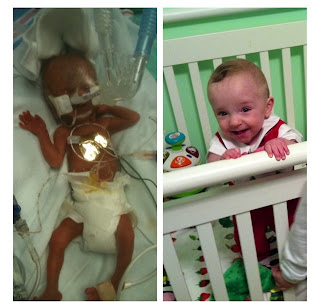 Posted by Micropreemie Mom at 4:51 PM