Wow, I can't believe Liam is already 6 months. A half a year has gone by since Liam was born.

Last week we had Liam's last Synagis shot for the season as well as appointments with his pediatrician and his nutritionist.

While in the NICU Liam got weighed daily, so waiting a whole month for a weight just seems like an eternity! I can certainly tell he has gained weight though, I just wasn't sure how much. At his last visit a month ago he was 7lbs 4oz.

I'm happy to say Liam is now 8lbs 13oz! How amazing is that! His weight and length are still not on the charts but his head circumference is now at 9% (adjusted age).

Our next visit with the pediatrician is at 9 months, crazy! I can't believe that Noah was 20.5 inches at birth and Liam is still behind that at 6 months.

I have to say though, at 3 months Noah just made 9lbs so Liam isn't that far behind with his adjusted age.

Just a bit of a recap of Liam at 6 months:

Size clothes:  For the most part Liam is in newborn clothes.  We are finally out of preemie clothes, woohoo!

Eating habits:  Liam is eating 80-90 cc's every 3 hours during the day and will usually wake up once at night to eat.  We are still seeing the nutritionist and are bulking up his formula to 24 calories.

Sleeping habits:  Liam is still pretty much like a newborn baby.  He mostly eats and sleeps!  After he has a bottle he sleeps a good bit.  At night he goes down around 10PM or a bit later and wakes up usually around 3AM.

Milestones:  As far as development and milestones go Liam is smiling up a storm, trying to swat things with his hands, sitting up in his bumbo like a champ and doing great with his tracking. With Noah I didn't pay half the attention to these things like I am with Liam. He is obviously behind in many things since being a micro preemie but he continues to amaze us with all that he can do.  Liam has been working with Early Steps and I feel it has helped him tremendously.

Here are some recent pics of my cutie. 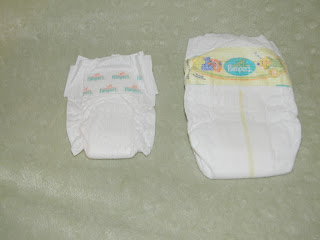 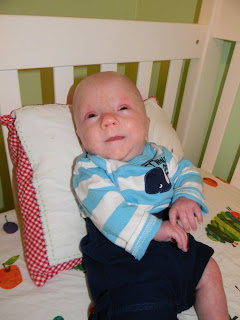 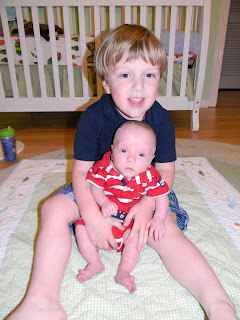 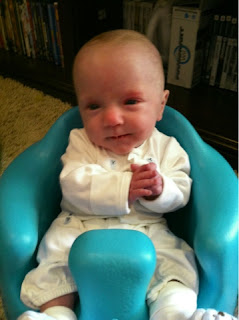 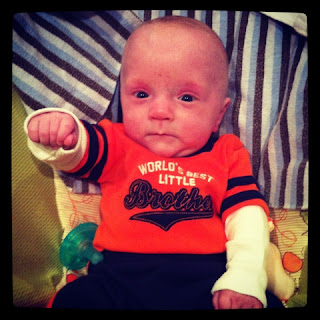 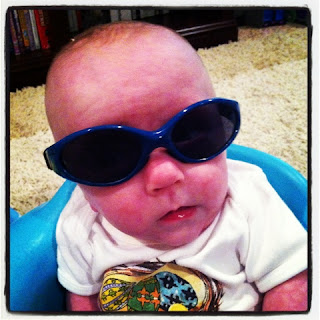 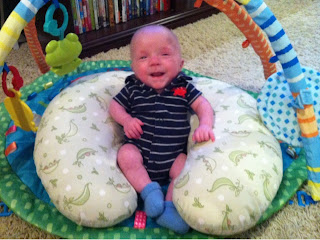 I hope everyone had a great Easter Sunday this past weekend!

The Easter Bunny was good to Noah and Liam.  Noah's favorite treats this year were skittles, chocolate bunnies and his Batman beach towel.  Liam scored quite a few good treats as well.  The bunny dropped him off some new burp cloths, a beach hat and some new booties.

We hosted Easter and this was actually the first time that most of my family met Liam.  My niece and nephews who live in Mississippi were very excited to meet their new baby cousin Liam.  Georgia and RJ were very smitten with him and Georgia wanted to hold little Liam so bad.  I told her he is still a wee bit too small but she can hold him on our vacation to Florida in June.

At times I could tell Liam got a bit over stimulated with the noise (we had about 25 people over) so we resorted to his room a few times to calm him.

All in all it was a great Easter! The kids had a great time with their cousins and had a blast at our egg hunt in the back yard.  The eggs are stuffed with bunny money and then the kiddos redeem their money at the bunny shoppe!  My Aunts go all out and get treats for the annual bunny shoppe. 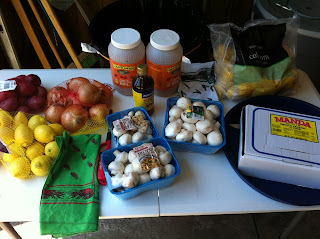 All the fixins for a good crawfish berl! 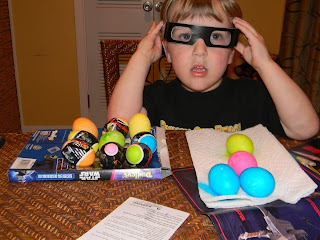 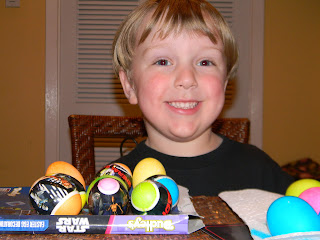 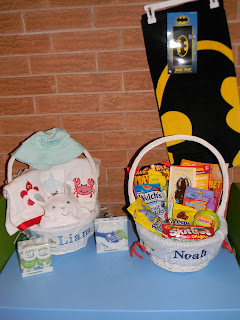 Look what the Easter bunny dropped off! 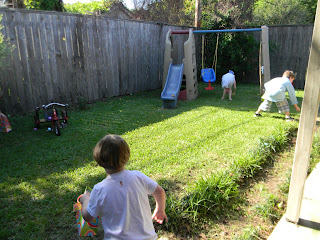 The kiddos are off on the hunt to find eggs with bunny money in them. 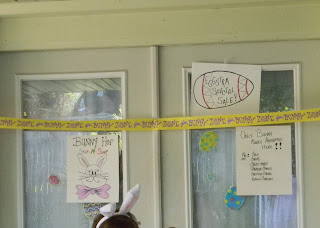 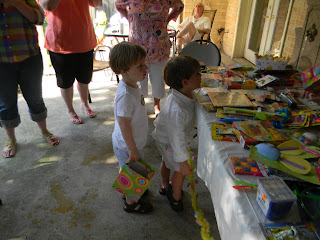 The boys in line at the bunny shoppe! 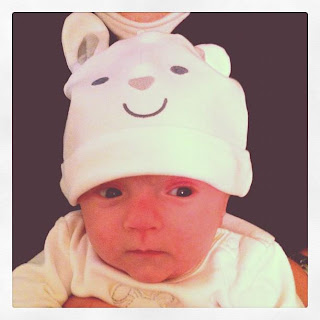 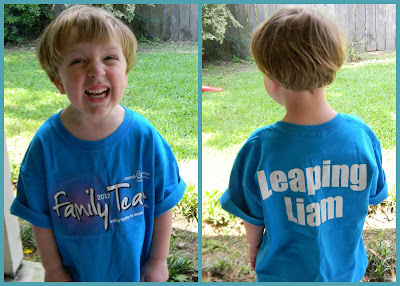 I'm so excited for the March of Dimes walk this month. I named our team "Leaping Liam" after one of our favorite NICU nurses Pam who affectionately referred to Liam as Leaping Liam. So far our team has raised a little over $1,000! How awesome is that?

I'm so thankful to the March of Dimes as they provide many research studies to help preemies and end preterm deliveries. One big thing I am so happy I received before delivering Liam over 12 weeks early was the steroid shots. Since we knew I would be delivering early my doctor suggested that I get the steroid shots. I'm positive that the steroids are what helped Liam only being on the ventilator for 8 days.

I heard via the NICU nurses where I delivered Liam that the March of Dimes donated car beds during Hurricane Katrina to help transport the preemies to another facility. I was told if Liam didn't pass his car seat test that there were car beds that we could use from the March of Dimes. Car beds are super expensive since you only use them a handful of times.

We still have 23 days left till our walk and there is plenty of time to donate or join our team! Any donation is accepted, even $5 is greatly appreciated. Just think of what you have spent $5 on today. If you are like me, it was probably a ridiculously over priced delish coffee (I'm currently sipping on mine now!).

I'm hopeful that there will be a cure for preeclampsia found soon in order to help keep mommy's pregnant until 40 weeks and deliver big happy babies! Hopefully with the donations received from the March of Dimes a cure can be found to help other miracles like Liam. 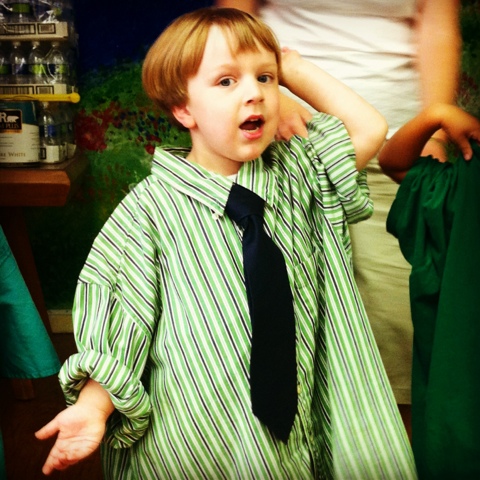 Today was Noah's fashion show at his preschool. We were told to bring clothes from mommy or daddy for your kiddo. I wasn't really sure what to expect but it was really adorable. Noah picked out this shirt that his daddy wears and paired it with a navy blue tie. I think he looked precious in it!

This is a video of him being announced at the fashion show.

I had no idea Noah wanted to be a pilot! It made me giggle. Too cute.

We actually took Liam to the fashion show and he did very well. He was quiet during the show and several moms glanced by and I was able to be the dotting mom. One of the grandparents guessed that Liam was 3 weeks old and she was shocked with my response that he is almost 6 months, hehe. Oh well, that's the first of many times I'm sure!

Noah was very proud to show off his brother, he loved showing the teachers his baby. After the fashion show the kids filled up on sweets brought by the parents (Noah insisted that I make rice krispie treats). It's sad to think that Noah's preschool days are almost over and that he starts Pre-K 4 in the fall, wah!