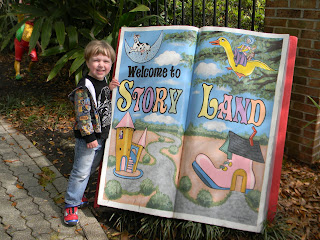 Noah had his fourth birthday party this past weekend and he had an absolute blast! We had it at Storyland in City Park in New Orleans and the weather couldn't have been more perfect. Usually by March we are sweating it up but the Saturday of the party it was beautiful! Noah even had to wear a hoodie for some of the party.

This was the first year that we invited the kids from Noah's preschool and Noah was so excited that his friends came to his party. On top of his preschool pals, Noah had many cousins there and my friends children.

The favorite part and highlight of the party for the kiddos was the dragon slide. At first Noah was too scared to go on it alone so my friend Jenny took the first few slides down with Noah. I always remember as a child that the dragon slide was super steep but as a mother I was even more terrified! I think my cautiousness rubs off on Noah but after a while Noah was zipping down that slide in no time alone. 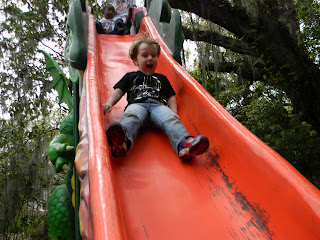 This is my favorite picture of the party, look at how excited Noah is! I know it's blurry but he just looks so so happy. 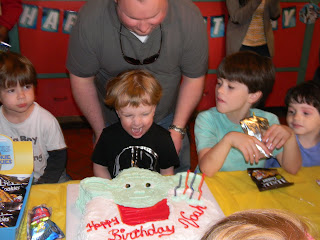 This is the first birthday party out of the home and both ways have it's pros/cons but let me just say, it was so nice to just do a quick clean up and we were out of there! Definitely something to remember for next year.

Posted by Micropreemie Mom at 1:10 PM