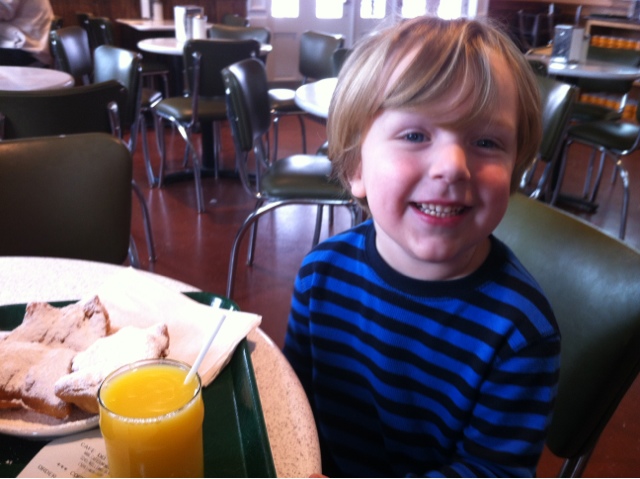 Today my big boy is four years old. The big 4! For whatever reason I think 4 sounds so much older than 3, don't you think? I can't believe this fall Noah will be going to big boy school all day. Time is really flying by.

This morning I took Noah for a special birthday breakfast, beignets! Noah loves licking up all that powered sugar. Oh the joys of being a little boy with sticky fingers.

Since Noah's birthday party isn't for another 2 weeks I wanted to let him know that today was indeed his birthday and that he could open up our presents as well the presents from my parents and my sister. Noah had a request for vanilla cake with chocolate frosting. He had such a hard time blowing out the candles, it was really too cute. 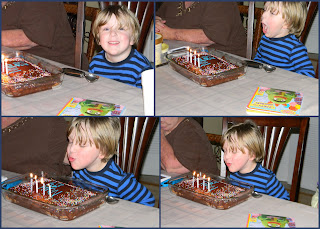 While Noah was opening up his presents, his comments were just priceless. "BATMAN underwear! Are you serious? You've got to be kidding me! I love Batman!". Needless to say Noah was very impressed by the Batman underwear he received. It's amazing how fast he can change from his obsession of Star Wars (which is why we had Star Wars invites) to now him playing with Batman 24/7. 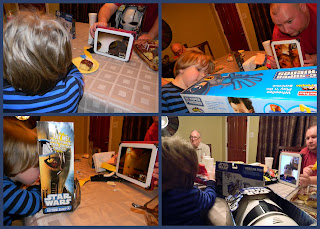 A highlight of the night was facetiming with my sister Robin and her kids. It was a lot of fun to be able to share the night with them. Noah had a blast showing Deuce his new Star Wars masks while Deuce showed Noah his Darth Maul mask (which really kinda freaks me out!).

I can't wait to see where our 4 year old journey takes us this year. So far it seems to be filled with Nerf gun fights, Star Wars masks and Batman! I think it's official to see that Noah is no longer my baby but my big boy. 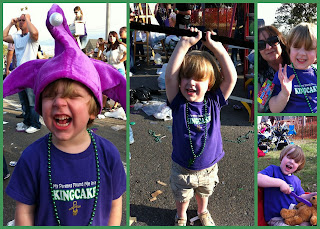 Well, this year Noah was all about Mardi Gras! Luckily we live within walking distance to the parades so if there was a parade rolling, Noah was there. Clint and Noah were parade buddies this year since I am housebound with Liam.

Noah would come home after each parade so excited to show me his throws. He even caught a rose and when he came home he told me he caught it just for me, how cute is that? Some of his favorite throws this year included the purple hat in the picture, countless stuffed animals and a stuffed arrow that he uses as a light saber!

As much as Noah loved Mardi Gras this year I am happy to see it go for one big reason...the noise! We live at the end of the parade route and I could hear dance teams and marching bands till midnight some nights. Eeek. See ya next year carnival!

Posted by Micropreemie Mom at 6:04 AM 0 comments 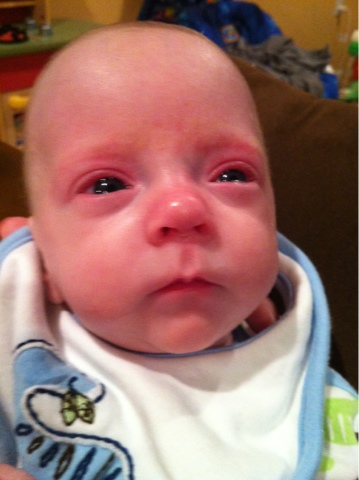 Well it happened, we had our first ER visit outside of the NICU. I always feared having to go back into the hospital as I hear re hospitalization for a preemie is a big possibility during their first year of life.

It all started last Monday when Liam had a bit of congestion and had teary eyes. Noah was already sick so I decided to just take both of them in. Side note, Noah had an ear infection. Doh! One of his tubes came out but hey, they made us ear infection free for 2 years!

Anyway back to Liam, the doctor said that since he doesn't have a fever that there isn't much he can do and to bring him back on Monday if he isn't better. He said to make sure he is kept elevated to help with his congestion.

That night I went out and bought the Rock and Play Newborn Sleeper. All the new Mommy's swear by this thing so I decided to jump on the bandwagon and give it a go. They didn't have this product when Noah was born. Well let me tell you, this thing is a life saver! If you are buying a gift for a new baby get this, I swear the new mom will love it!

The first few nights were rough with staying up almost all night and sucking his nose (or as Noah calls it "sucking his brains") with a nasal aspirator. Once the weekend hit he started to develop a cough. Great. At every cough, I would run to him like a crazy person to make sure he was ok.

By Sunday the cough turned into a nasty cough that would follow by some rapid breaths after. My mom was over and convinced me to take Liam to Childrens. This was a hard thing for me to do as I feel we just left the NICU and I feared he would be admitted and again we would be separated.

As I was packing things up for Liam before we left, Noah almost broke my heart.

"Mommy, why is Liam going to the hospital? Is he going back to the NICU? I don't want him to go back to the NICU, I want him to stay with me. Please don't take him back." I had to do my best to not start bawling, how sweet! I forget how much Liam being a preemie has affected Noah.

My mom went with me to Childrens Hospital and we waited a while to be seen. Once the doctor finally came in and examined Liam we were told it was just a cold. He said to continue what we were doing but if he started a fever to bring him back and if he isn't better by Thursday to bring him back to our pediatrician.

While I was glad it was just a cold, it's just sucks that I just have to let this run it's course. I hope he is back to his normal self in a few days! I can't wait till flu and RSV season is OVER!