Christmas...already? My world has been so busy with running to and from the NICU the holidays really came out of nowhere!

As usual, we did our annual tea at the Roosevelt Hotel which was just lovely as ever! As soon as the trumpeter came in the room followed by Rudolph, Noah's face lit up in excitement. He really loved it. The kids all had a good time and the lobby at the Roosevelt is just gorgeous. 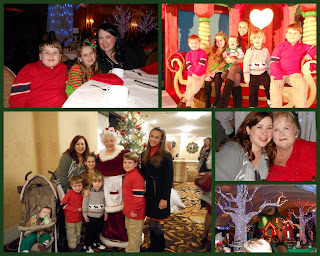 Noah was very excited for Christmas this year and had a list for the man with the bag. His big wish list items were the Imaginext Batman Bat Cave, Star Wars Trouble, a Leap Pad and a Star Wars Millennium Falcon. Noah was in luck, Santa managed to drop all of these off to his house and his grandparents. What a good boy he must have been!

When we were at Target the week of Christmas Noah noticed they were out of stock for the Bat Cave and I said "Oh no! I hope Santa was able to get one before they sold out". Noah's response? "Well Momma, Santa doesn't shop at Target the elves only make it!". Touche Noah, touche!

The weekend of Christmas my friend Ann came by and we made Pioneer Woman cinnamon rolls. Yes, cinnamon rolls from scratch! I really thought Ann had used yeast quite a few times and knew what to do...but we were basically the blind leading the blind. The rolling of the cinnamon rolls made quite a mess but they were delicious. Maybe it can be a yearly tradition, what do you say Ann?

While we waited for the cinnamon rolls to rise and all that jazz, we decide to whip up some sugar cookies for Santa. Noah had a great time decorating them with Ann and I. It's amazing how well behaved Noah will act around company, I need to invite Ann over more often!

Noah was very anxious Christmas morning. Hearing his gasps of Ohhhs and Ahhhs was just great. It was a great morning. Santa even brought some presents for Liam! Noah did make mention to why Santa brought Liam his gifts under the tree and not leave his gifts at the NICU. Noah is one smart cookie that's for sure. 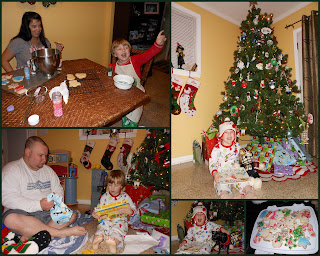 Our Christmas wouldn't have been complete if we didn't get to visit with our little Liam. Have I made mention of how great his nurses are? They are seriously the best! One of the nurses brought in a little snoman suit and Santa suit for Liam. He was the cutest little Santa I've ever seen! Santa even made a visit to the NICU, he is one lucky little guy. 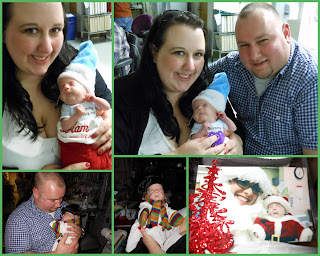 I can't wait till next Christmas to have our first Christmas as a family of four at home.

Posted by Micropreemie Mom at 12:35 AM