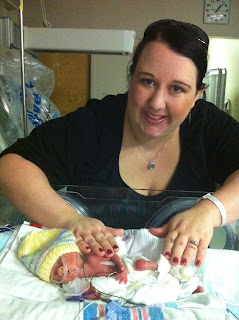 Today Liam was lucky to have many visitors! In addition to his mommy and daddy he had his Gigi, Aunt Mo and his Aunt Eileen visit today.

Since only Clint or I and 1 guest is allowed in the NICU at a time it can become challenging. We've found that it's best if we all go together and then we just keep on floating visitors in and out. Poor Noah and Abigail had to wait in the waiting room, no kids are allowed.

Lately every day I go there is something new. Today Liam had a pacifier in his isolette. I asked if I could see if he would use it and the nurse told me they just have to stand there and hold it in his mouth but he does suck! I placed it in his mouth but since he is to little I couldn't tell if he was sucking or not but it was still fun to try. 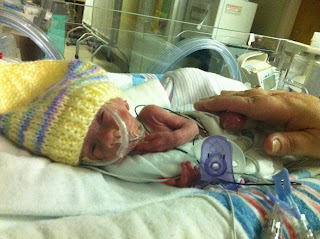 I have to admit though just being able to touch him really makes things more real for me, it creates such a good connection.

During one of the pictures it's like he was either waving or trying to give a high five to the camera, check it out! 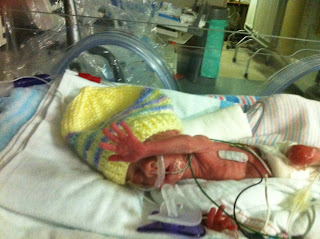 Liam is now tolerating feedings. They tried to feed him last week but he didn't take to it well but he is now doing great. In no time he will be packing on the pounds or should I say ounces! He has now broken one pound and today his nurse told me he gained 30 grams (which is a teeny bit more than an ounce) so he is gaining well!

Posted by Micropreemie Mom at 11:00 PM