This morning was the first time I went and visited Liam in the NICU alone. Usually Clint and I go after work but since I was just given the ability to drive again I decided to go to the NICU after I dropped Noah off at school.

I was kind of upset b/c they took forever to round so I wasn't able to see him immediately when I got to the hospital. I had all of my pumping gear so I went to pump and then they were open for visitors, yahoo!

The nurse was so sweet and I feel bad for not knowing all of their names yet but she was just great. She asked if I wanted to hold him and of course I said yes! At first his oxygen kept on dropping, so I told her that it really scares me and if she thinks he needs to go back do it automatically and that I can hold him another time. Well his oxygen was fine and we actually cuddled for almost an hour! It was amazing. I could have actually held him longer but I had to go and get Noah from school.

While I was there she gave me a pumpkin hat to take him and wash for him. For some reason...this got me so excited! I had laundry to do for Liam! What!!! I then went to Target to get some dreft and to do Liam's first load of laundry. I wanted it completed before I went back to the NICU that afternoon with Clint.

OH and guess what? I also got to change his diaper! This is a first for me and it was a poopy diaper. His little butt is still so tiny. I'm so glad when I'm there to do all the "mommy" things.

I actually washed his pumpkin hat, another preemie hat, some receiving blankets my aunt gave me and another blanket from the NICU. After picking Noah up from school I rushed home to put the load in the dryer so it would be done by later in the afternoon.

When we went back to the NICU I was dying to put the pumpkin hat on Liam, look how cute! 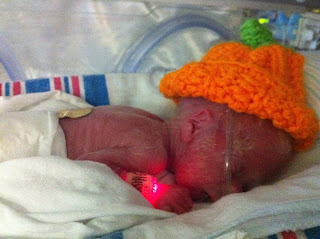 Liam is doing just great. Nothing every grew on his culture so he is off antibiotics and is just doing awesome. They are now fortifying his feedings so he will be gaining weight slowly but surely!

Posted by Micropreemie Mom at 11:20 PM