I can't believe another boy is on the way.

We had Chinese last Friday when we opened up the envelope from the ultrasound and this was Clint's fortune. 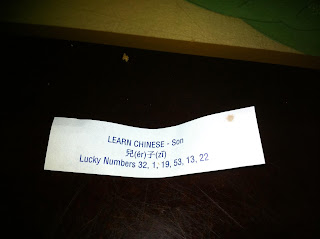 Noah was upset as he really wanted a baby sister. He actually cried when we told him it was a baby boy. However, he is coming around. He wants to name the baby Patrick and I want to name the baby Liam. I wonder who will win? Hmmm.

I am headed to a High Risk Specialist on Tuesday, so please keep the baby and I in your prayers.

Yesterday would have been my due date from my ectopic pregnancy in December.

Crazy to think that at this time I would have had a newborn. A cuddly newborn baby smelling of that sweet new baby scent.

Just makes me wonder what would have been. Would it have been a baby boy? Baby girl?

I'm obviously ecstatic to be almost 21 weeks pregnant but I still get a bit sad of the whole experience.

Thankfully this December will be so much better than last.

"We only have vitamins"

Last week I was changing Noah's shirt at my mom's house and we noticed some red bumps and within minutes many more popped up. My mom and I immediately thought hives or some sort of allergic reaction to something. Thankfully the doctors office was still open when I called. I'm glad I live so close to the pediatrician office that it was a 5 minute car ride.

As soon as Noah saw the nurse he started his chatter. "I have red bumps ALL ON MY BACK and they itch, and they are on my face too!" he told her with such urgency. Take note, he didn't have red bumps on his face. All the nurse could do was just comment on how talkative he was. I have no idea who he gets it from.

We then waited to see the doctor. Take note, this is a new doctor that Noah has never met. You never would have thought that he has only been to this office once before because he acted like he owned the place!

Before the doctor could even introduce her self, Noah decided to introduce himself. "Hi, I'm Noah. I'm three. I have red bumps on my back that itch and they are on my face too! Oh, and my throat hurts!" he began to tell her. She giggled and started examining Noah.

Noah just spoke non stop to the doctor, it was as if I wasn't even there! Maybe I can just start dropping him off? Hehe.

The doctor prescribed some ointment and his bug bites are doing better!

Posted by Micropreemie Mom at 11:21 AM 0 comments

Wooah, we're half way there

Wooah OH, living on a prayer!

I'm at the half way mark of my pregnancy, I've hit 20 weeks. Yahoo! I can't believe that the half way mark is here. I am still very anxious and nervous due to my previous losses but very excited to have made 20 weeks. I have our big ultrasound next week and I know I'll feel eve more relieved after that.

Posted by Micropreemie Mom at 10:17 AM 1 comments

I had another appointment with my doctor yesterday afternoon. It was a follow up to my appointment last Monday where I was put on blood pressure meds since my numbers were pretty elevated.

For the past week I have taken my numbers and while they are better than they were without meds, they are still above normal range. Once we got to the office, I was told my doctor was in surgery so it would be awhile. I waited about 40 minutes and then finally was told my doctor was back. The nurse took my blood pressure and it was high...really high! What gives! It was about 20 points higher than when I take it at home. Which makes me think, is my machine at home broken? Or, do I have white coat syndrome?

I wasn't nervous at all and I've been sitting for almost an hour, so obviously the high number made everyone nervous. My nurse made me sit there with my legs elevated and the chair back for about 15 minutes. My doctor then took another reading and it went down a few numbers but it was still high. :( Yikes.

Our new plan is that she is upping my dosage, so we will see how it is in another 2 weeks. Since I'm having such issues with my blood pressure we will also have ultrasounds once a month to check growth.

I was wishing, hoping and praying I would be given my anatomy scan yesterday since last Monday we weren't able to do the full anatomy scan...but no dice. Ugh! So, I still have to wait to see what this little baby is. I'll be almost 21 weeks at the time of the ultrasound so there should be no guessing and hopefully the baby cooperates this time.

For now, I'm just checking my blood pressure daily and taking my meds and hoping things settle down. I was told again that preeclampsia is a strong possibility, I just hope I don't go on bed rest before 30 weeks!

Last weekend I had to pee non stop. I know, I know...pregnant women pee all the time but this was much more frequent than that. I called my doc and she told me to come in and give a urine sample. The urine sample showed a high white blood cell count, so she gave me some meds to treat a urinary tract infection.

Well, little did I know going in that day that my UTI was the least of my problems. Once I got there they always take my blood pressure and today it was rather high. Please take note that with my current miscarriages and regular appointments I've had my blood pressure checked for the past consecutive 6 months before I was pregnant. I had no issues of high blood pressure.

I had pre-eclampsia with Noah but I didn't develop this until much later in pregnancy. I was put on bed rest and delivered Noah at 37 weeks. I always knew it was a risk to take in getting pregnant again but I had no idea I'd be dealing with this issue so early on.

I was told to take my blood pressure daily and keep a log of my numbers. They were pretty high all week but I was told to do it for 1 week and then call my doctor. I did just that.

I called yesterday with my numbers and they wanted me to come in later that day. I went in and my blood pressure was still high. They ordered an ultrasound to make sure the baby was OK. Everything checked out and the baby was fine but we didn't get to see the gender (baby had his/her legs crossed). I had a gender reveal party set for this Friday that we now need to postpone. Bummer!

I also had to do some blood work and a 24 hour urine catch to make sure I'm not spilling protein into my urine and that my kidney's are working the way they should. The doctor also gave me medicine to help lower my blood pressure.

So that's the plan for now! To take my blood pressure meds and go back next Monday. Hopefully next Monday we can make an appointment for an ultrasound to see what gender #2 is!

Posted by Micropreemie Mom at 10:41 AM 0 comments