The Puppy Who Lost Its Way

Last week we were at the happiest place on earth...when we received some unhappy news.

My father in law who was watching our puppy called to tell us he was lost. I think my heart skipped a beat. How did this happen?

"LOST? What do you mean lost?" was the first thing that I said when Clint told me the news. How can he be lost? Uneaux has only gotten out one time in almost 6 years and that was b/c I accidentally let him outside not knowing Clint had the garage door open. OOps.

Uneaux has never tried to dig out or anything and chihuahuas aren't known to dig holes under fences.

You can just imagine how nervous and upset I was while we got this call around 10PM last Tuesday. Clint's dad just was going to go home because he said he did all the searching he could do. I think this video summed up how I felt at this point.

If you know me well, you will know Billy Madison is my all time favorite movie so it's fitting on many levels.

Clint and I sat in Epcot just loss for words on what to do. Fly home? Drive home? We had many thoughts entering our heads and no clear solution to the problem.

Our street is between 2 busy streets and we have a 6lb black chihuahua who was lost at night...we are obviously thinking the worst. I immediately thought to call my friend Ann and ask her to look for the pup.

I called Ann up hysterically crying and trying to explain to her the situation. She agreed to go over and see if she could find Uneaux. She went over and checked out the neighborhood but couldn't find him. She said she would go back the next day and put up fliers. What a great friend! 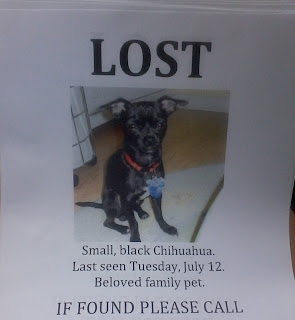 The next morning, my father in law received a few calls of Uneaux being seen by neighbors but nobody was able to catch him (chihuahuas are super fast!). I called Ann to see if she could go over and see if she could find him. Well, not too long after we hung up I get a call from Ann. "GUESS who is in my car?" she said, oh my god she found him! I'm pretty sure I started crying at that point.

Phew...I felt like I could finally breathe again knowing Uneaux was safe and sound. I'm lucky to have such a great friend who was willing to go and search for my pup multiple times. In Disney, I got her a Pluto glass monogrammed with "dog catcher" on the back. Teehee.

Needless to say, once we all got home with gave Uneaux the biggest hug!

Posted by Micropreemie Mom at 3:25 PM