This past Sunday I went to look for a movie for Noah to watch On Demand. I flipped as fast as I can through the listings to avoid Noah seeing the Squeakquel of the Alvin and the Chipmunk movie (I seriously must have seen that movie 20 times). I saw that HBO had E.T. listed under their kid movies. I can't even tell you the last time I saw E.T., I guess it had to be about 10 years ago.

Noah saw the picture of E.T. and yelled "Oh YUCK! He is ugly, he looks like Uneaux!". My poor chihuahua, can you see a resemblance? 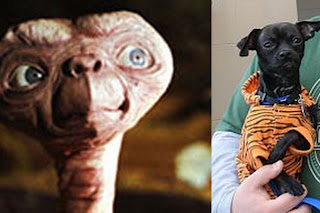 Poor Uneaux. The odds aren't in his favor.

After the initial shock that E.T. was gross, Noah became intrigued with E.T. I decided to put it on in hopes that it would hold his attention more than 20 minutes. I fast forwarded to the part where Elliott places Reeses Pieces up the stairs and all you see is E.T's fingers grasping the candy. "Oh look! He is eating eggs!" Noah commented. I corrected him about 5x telling him it's not eggs and that it was candy. However, Noah is insisting they are eggs. Maybe he is getting confused that Easter candy is in the plastic eggs? Who knows.

His favorite parts of the movie are when E.T. gets dressed up in the wig and when Drew Marrymore first meets E.T. and she screams hysterically. 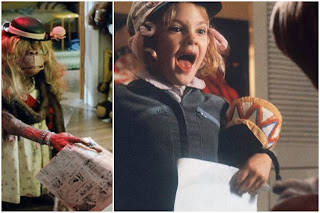 Since E.T. came out in 1982, the year I was born, I don't remember every detail of this movie. Since Sunday, I've watched it about 5 times and it's really a great movie. It's definitely a nice change of pace from Peter Pan and Toy Story!

My sister Robin had an E.T. doll back in the day. I actually think we may have a picture together with the stuffed animal when I was an infant. My mom vividly remembers seeing E.T. about 5 times back in 1982, she claims it was in the movie theater forever. I tried finding an E.T. doll and they are now like $70! Wowza!!!

On the way home today, Extra Terristerial by Katy Perry came on. Maybe E.T. is making a come back? Noah would be thrilled! I'm sure the dolls would be less than seventy bucks!

Posted by Micropreemie Mom at 10:40 AM

I seriously laughed out loud when reading this entry! So funny!