How in the world do I have a 3 year old?

For some reason 3 to me just seems SO much older than 2. I feel like over night Noah went from saying go go and ga ga to asking for pizza for dinner. Time has flown with my little man.

Noah is really into trains so it was only fitting to have a train party for his 3rd birthday.

I found a train that comes to birthday parties and takes the kiddos around the neighborhood, perfect! We talked it up for Noah the weeks before his party and he was pumped up!

Leading up to the party I was busy crafting for the big day! I made cupcake toppers, banners, favor bags, things to hang from the ceiling...you name it! I went a bit overboard but it kept me busy.

The party was a big success! Noah was surrounded by all of his friends and family (even my BFF was in town from DC!). We had a really great time. The train was a lot of fun and I know the kids had a blast riding on it. Noah received a ton of gifts and he had an incredible time. 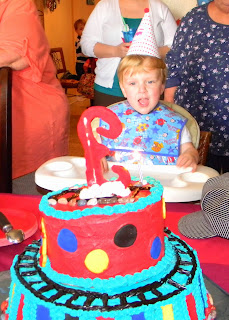 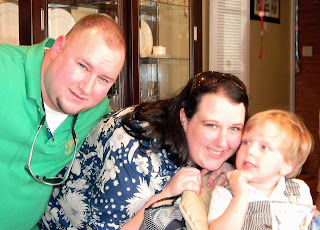 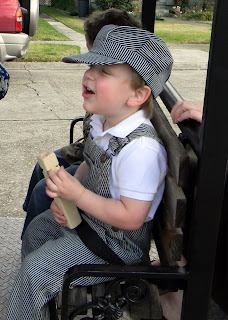 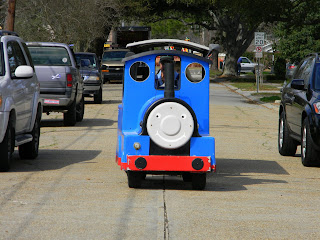 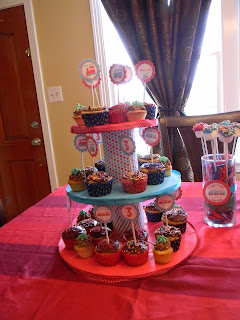 We don't go to church very often, sorry dad. Phew, I just had to get that out there before I tell you about Noah in church this past Sunday.

Noah is at a stage where he is just WILD all the time. Is it true that 3's are harder than 2's? If so, please say a pray for us the next time you are in church.

My niece was chosen to read an essay she wrote about family at mass, so I took Noah to the service. The essay was beautifully written and very sweet, go Abigail! It was chosen from many students so it was quite an honor.

I thought Noah would behave decently at mass but boy was I wrong! Whenever everyone would sing songs he would beginning clapping at the end and say "Good job!!! Good job everyone!". Sure it was adorable, it's adorable when it's not your kid.

If we weren't standing, Noah would slide/crawl along the pew. I could feel the eyes peering on the back of my head by the many church goers behind us. Noah could care less that I kept on correcting him because he kept on talking throughout the mass and munching on animals crackers.

Once communion came along he kept on trying to talk to the altar boys from the pew "hey, what are you doing? What are you making? Can I have some?" once he saw them holding the communion.

As I held his hand going up to communion, Noah was very upset to find out he didn't get any. After he received his blessing, he kept on standing there asking the priest for his piece. I finally had to just pull him along and once we got to the pew he was very upset. "They ate it ALL? None for me? Why? I'm HUNGRY!" Noah began to scream.

Thankfully there isn't much left to mass after communion and I was so ready to "go in peace". It's so funny how Noah sees things. As we were getting in the car he said "That was funny Mommy! Can we go again?". I couldn't help but laugh.

I think next time we go we won't sit in the first pew.

Posted by Micropreemie Mom at 10:55 AM 0 comments Mister Golden Sun,
Please shine down on me

I get quite amazed at times of what Noah learns at preschool. Last week he kept on singing the above song in his cutesy little voice. "Please shine down on meeeeeeeeeeee" he would sing as we were cuddling in bed last weekend.

Lately Noah is really into the weather. He gets upset if the sun isn't out in the mornings. "Where is the sun mommy? Why isn't the sun out today?" Noah asked earlier this week. Good thing we don't live in areas that are highly affected by SAD. On Sunday he came bursting into our room all excited, "Mr. Sun is up! Wake up! Mr. Sun is out today!".

Maybe he will be a meteorologist?

Posted by Micropreemie Mom at 10:11 AM 0 comments

Prior to this Valentines Day, my most vivid memory was back in February 2001. I was a senior in high school and Clint and I have been dating for a few months. I remember waking up to go to school in Sarah's fly Saturn and seeing a complete surprise outside. Picture 2 high school girls gushing over an oversized puppy stuffed animal, balloons and roses. Squee! Needless to say, I was very excited to have an awesome Valentines Day.

I'm not bashing any prior Valentines Day experiences over the past years but 2001 is the one that really sticks out. However, this year will be one for the books as well!

It all started with Clint calling me up around 3:30 on Friday telling me to leave early b/c of an accident on the interstate. I'm not going to lie, this made me suspicious but in an excited way. I left work maybe 15 minutes before 5. When I pulled up to the house, I noticed there were rose petals on our doormat.

Once I opened the door, there were petals and Hershey kids from the entrance to our bedroom. There were notes along the way saying "I kiss the ground you walk on!". Cheesy? Yes...but I think Valentines is an exception to where the cheesiness can be accepted.

In our bedroom the bed had a heart on it made of petals and then in the shower a note hung from the ceiling saying we had reservations that night for dinner and to hurry and get ready because he is currently dropping Noah off at his aunts. I was completely shocked by this! Clint and I don't go out much without Noah so for him to take the initiative and plan things meant so much to me. I'm the planner of the family so for something to be planned for me was awesome!

On our shower bench there was a dozed red roses and a gift certificate to the spa, it was awesome!

Clint did a great job and we had a very yummy dinner at Ruths.

What did I get him you ask? Well I gave Clint his present on actual Valentines day which was a gift certificate for a New Orleans cooking class and a gift card to Whole Foods, he loved it! 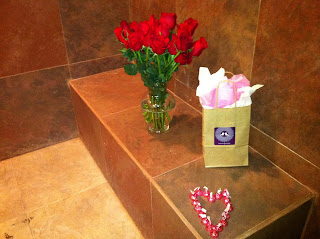 Yesterday on the drive home, I decided to get off a few exits early on the interstate due to the cold and rainy weather (I'm a freak lately about driving in the rain).

This particular exit is known to have the less fortunate asking for money. Well yesterday, there was a man there holding a sign. Let me just tell you it was freezing and raining and he was just standing there with the sign. He wasn't going up to cars asking for money, he just stood there calmly.

The sign read " He is in control, trust God". It reminded me of that song by Joan Osbborne "What if God was one of us" from the 90s.

I've been having a really hard time lately with the miscarriage. I can't keep on asking myself questions daily of why it happened and more importantly, questions about the future.

For some reason, seeing this sign was kind of like a chill out for me. On the drive home I felt a sense of relief. As much of a planner I am, it's hard for things to not "work" out if I have done A, B and C to equal a D outcome. I'm a realist and not really a dreamer and focus strictly on the facts.

I need to realize that no matter how much I plan, I'm not the one fully in control. I'm anxious to see what he has planned.

Excuse me missy, is your son a pirate?

Noah is starting to actually want to choose what he wears lately. This for one makes me sad because I try my best to make him as stylish as as any 2 year old can be.

This past Saturday we took advantage of the sunny weather and headed down to the Audubon Zoo (and they all asked for you!). I let Noah pick out his outfit. Naturally he chose his elephant shirt but decided on a few additional accessories. No outfit is complete without an eye patch and a single skeleton glove (thanks MJ for still having the 1 glove look rocking in 2011!).

Clint was quite embarrassed and kept on telling me to take it off. I disagreed and let Noah keep it on. Sure he got some looks, but I was letting him by the little 2 year old that he is. I bet the other pirate loving little boys were envious of his cool patch.

The pirate movement is still rocking in our house today. This morning I put out for Noah to wear his pirate sweater. Noah insisted on putting on the patch, glove and adding a new accessory a sword! I'm wondering what his preschool thought of the ensemble. Hopefully Noah didn't plunder anybody! 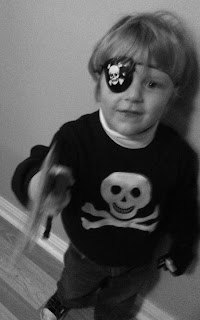 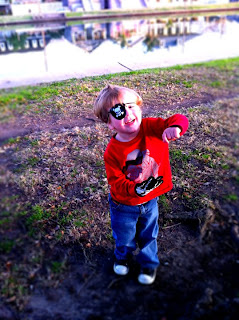 Wonder what obsession he will have next, I'm putting my bets on Spiderman.

Did mommy make it?

First off, I'm super lucky that my hubby is a great cook and that he actually likes cooking. Because of this, I rarely get to cook. Clint will come behind me and do an additional stir or sprinkle in more seasoning right behind me, so I let him be the boss of the cooking. I prefer baking, so I'm the baker of the house (mmmm....cupcakes!).

Noah is a typical picky toddler when it comes to food. If it's not crackers, cookies, chips, oatmeal or yogurt he isn't a happy camper. The few exceptions of food that he will eat when we make it are spaghetti and jambalaya (naturally 'Nawlins!).

Last night we were having some chicken tenders and mac and cheese for dinner, I know real nutritious! Noah kept on noticing that I was grating the cheese for the macaroni. "Mommy, you making mac n' cheese?" he kept on asking.

Once it was time to eat, Noah actually ATE some mac and cheese! "Mommy, you make GOOD mac n' cheese!" it melted my heart! Don't give me too much credit, I really just put some shredded pepper jack cheese over some noodles.

To make it even better, Noah asked for seconds! Seconds! He never asks for seconds on anything. Think I should cook more often?