Noah has been eying the Santas Secret Workshop commercial for quite a few weeks now. Whenever it comes on he screams "I go there? Can I go there Mama?" so it was without a doubt that we would be checking out Santas workshop.

We got there about a half hour after they opened and wow...what a line! We had no idea there would be such a line for this. We figured oh well and decided to wait in the line. It felt as if we were at Disney World because as soon as you thought you were getting close, another line cue came up and we seemed further away!

In typical genius fashion they placed a beverage cart and a popcorn cart right smacked in the middle of your long wait. I was with a group and the group decided it wasn't good to let the kiddos eat the popcorn as we were going to dinner after (this was a big mistake, keep reading).

Once we finally got into Santas Workshop, you were given a tour throughout the North Pole. Noahs favorite part was the elf workshop! When you entered the room, you saw little elves working on some of the most popular toys of the season. Noah ran in and started squealing. "STINKY!" he screamed like a maniac and then ran under the rope which was used for kids to NOT run under it. Grr. I had to pull him back and of course a tantrum ensued because he realized Stinky wasn't coming home with us today. However, it was super cute and I hope Santa found a Stinky because I'd love to get this reaction on video!

After the tour, we then waited in another line to see Santa. While we were in line Noah and I kept on rehearsing what we were going to tell Santa. When it was our turn, we cheesed for the camera to take our free photo and then had some one on one time with the big guy. "So, what do you want for Christmas this year?" Santa asked Noah. "Garbage truck and a bike!" Noah responded. Santa then said "Stinky the garbage truck?". Noah was SHOCKED..."YES, yes STINKY Santa!" it was so adorable! Noah couldn't believe Santa knew which garbage truck he wanted, it was really the cutest thing ever.

After we left, the crew then headed over to Fulton St. Since it was now about 8:30, we decided to eat first. Remember that popcorn I was telling you about? Well that would have held us over because our food took over 30 minutes to come to our table. All we had were burgers, so I have no idea what could have taken that long. Grr.

Once we finally received our dinner and we chowed down, we went outside to check out Fulton St. Let me just tell you that the kids loved the "snow". It was so cute to see all the kids running in the sprinkle of snow! Noah loved it!

It was a great night and Noah had a blast with his cousins and his new friend Connor! 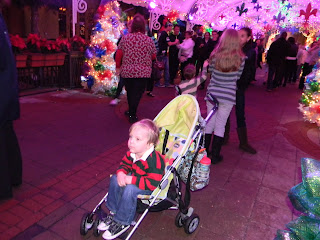 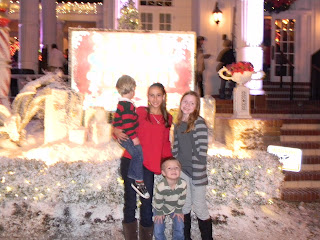 Posted by Micropreemie Mom at 11:29 PM