This past Sunday I took Noah to Breakfast with Santa at a local hotel with our friends Jade and Gabe. We talked it up all week of how we were going to see Santa and went over what we will tell Santa what we wanted for Christmas.

Noah is currently obsessed with Stinky the Garbage Truck. We have looked everywhere and it's sold out. Oops! 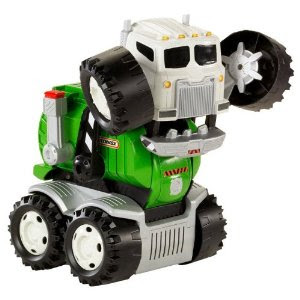 Once we get to the ballroom we were seated at a table. They didn't have enough high chairs so Noah had to sit in a booster. At first I was terrified that this Breakfast was going to turn into a nightmare, but surprisingly he did great in it! We may be moving towards boosters now!

The room was decorated very festive with a big Christmas tree and a big table in the middle that displayed a gingerbread house and had activities for the kids (coloring sheets and what not). 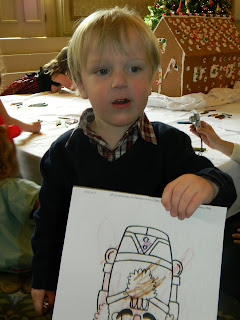 Noah colored a nutcracker...he is obsessed with them! 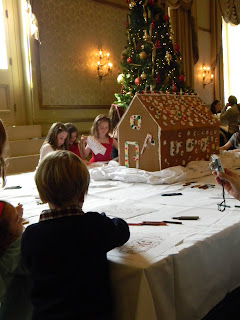 As we were eating our breakfast Santa busted in the ballroom,"HO, HO, HO!" Noah and Gabe were so excited. As Santa passed our table Noah said "Santa, I need Stink the garbage truck. RIGHT NOW!". Wow! You would think since you make such demands, especially to Santa you would maybe say it in a nice voice...but no, not Noah! He said it very sternly and loud. Jade and I got a good chuckle. 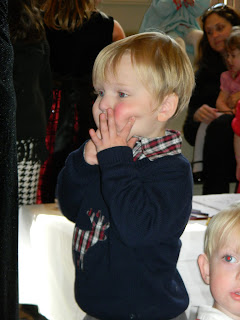 After coloring many holiday sheets, signing Jingle Bells and chowing down on breakfast we made our way downstairs with Gabe and Noah so they could have some one on one time with Santa. Noah was so excited, he ran straight up to Santa and began telling him all his wants. He was pretty taken back by him and was in awe as well. We got a great picture of him with Santa. 2nd picture this year already, I'm telling you I will have a collection of Santa photos before Christmas!

Baby Gabes visit with Santa didn't turn out as well. Poor thing! Let's keep in mind Gabe just made 1 this past August and it was his first time meeting Santa. Once Santa was holding Gabe, Gabe started crying hysterical! The poor guy has BIG crocodile tears running down his face. It was so sad! "Don't cry Baby Gabe, don't cry! It's SANTA!" Noah was trying to explain to him. Poor Jade spent $10 on a picture where her son looks like he has seen pure terror!!! Oh well, it's one for the books that's for sure.

Before we left we tried to get a picture of Gabe and Noah together. Think they like each other? 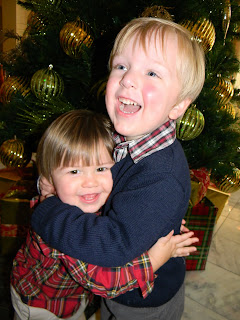 It was a great morning and I think we will try to make this a tradition for years to come!

Posted by Micropreemie Mom at 11:20 AM

That's cute!! Travis stopped sitting in high chairs a few months ago. He does great in boosters. Im sure you will have no problem. And that sucks that Stinky is sold out everywhere. Travis doesnt like his now that he has one. We are hoping he will like it soon! lol.