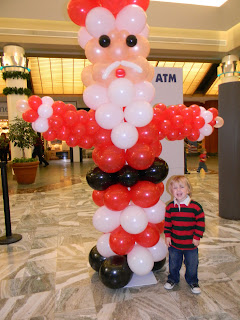 This past weekend Santa arrived at Lakeside Mall. I heard about this by radio ads as well as seeing a commercial. Since I'm part elf, I love anything that has to do with the holidays. It was a no brainer I would want to attend this.

I've never been, but was anxious to see what it all entailed. Jade and Jenna came with their boys and joined Noah and I. We got to the mall about an hour earlier than the event to get breakfast at Cafe Du Monde. Seems like everyone had the same idea, we could barely get a table and the line for beignets was insane!

We ended up at McDonalds for breakfast and ate before we went to wait for Santa and his crew to arrive. Once we finished up breakfast (mmm...McD's hasbrowns)we headed to the center court of the mall to wait for Santa. We had our 3 strollers lined up and the boys were super excited for Santa. 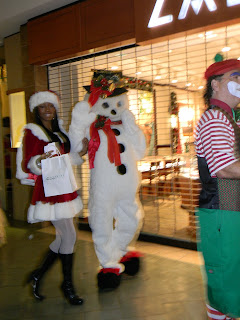 Santa, Mrs.Clause, Rudolph, Frosty and their crew 2nd lined down the mall with a band. It was Naturally Nawlins, y'all! 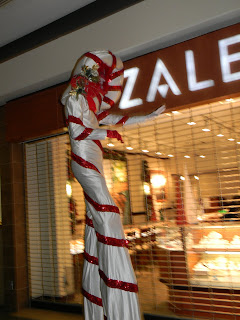 They also had these really cool candy canes on stilts, they were awesome! 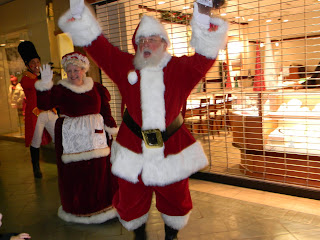 Noah was very excited to see Santa. It was adorable to see the boys light up when they saw Santa.

The center court of the mall was all set up for Christmas. The Christmas train was up and running and Noah and Alton were psyched to ride it. 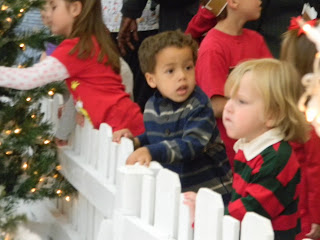 The line was out the wazoo, but Jenna and I decided to wait in line and take the boys on the train. That lasted about 3 seconds before the boys started chasing each other and hugging each other non stop to where they fell over to the ground! 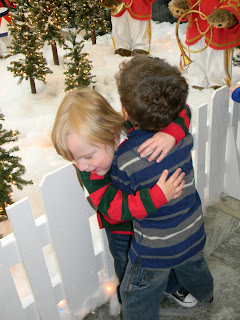 We both felt really bad about fibbing to Noah and Alton that the train broke. However, there was NO way they were going to cooperate to stand in line for a good 20 minutes. We need to make our way out there before the big man comes.

The morning was great and I know Noah had a blast. I was so glad I decided to take him, it was a great way to start off the holiday season!

Posted by Micropreemie Mom at 9:15 PM