Noah is a typical little boy who is obsessed with Spiderman one week and Woody the next. For Halloween he would carry around the Party City ciruclar pointing to different costumes daily of what he wanted to be for Halloween. Some days it was DJ Lance Rock and other days it was Buzz Lightyear. 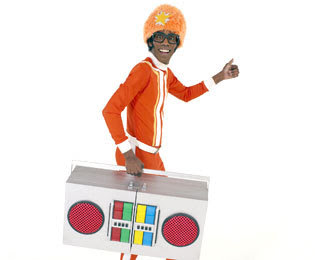 We decided that he would be FRANKENSTEIN for Halloween. He was obsessed with anything and everything to do with Frank. You name it...he wanted it. Frankenstein cookie? Got it. Frankenstein ballon? Yep we got that to. 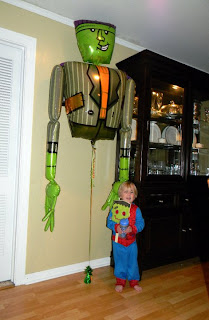 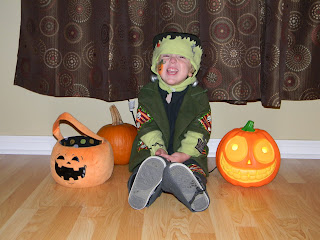 Well as Halloween drew nearer Noah started saying he wanted to be Spiderman. SPIDERMAN? We had poor Frankenstein chillin' in the closet waiting for Halloween night. Not only did we already have that costume but I didn't feel like spending more $$$ on another costume.

The Friday before Halloween Noah talked me into trying to find a Spiderman costume. I figured it would be on sale now, right? Well it was at KMart but I found this out after going to multiple stores and either it being full price or not having it in his size.

Once I got to KMart I was pretty desperate, ok really desperate. They had a costume but it was a 7/8 and Noah is in a 3/4T. This is obviously way too big for him but it was dirt cheap so I decided to just go ahead and get it. He could wear it to Story time the next day at Barnes and Noble.

I got home and realized that this costume is WAY too big, what was I thinking? Since I bought it on clearance I couldn't return it so we were stuck with it. Clint had the genius idea to hot hem the outfit.

I was so impressed by Clints skills! He could totally go on Project Runway. Clint had to cut the pants and take the red part and then hot hem it to where it was previously cut. Then, he had to turn up the arms with the hot hem. It doesn't sound like much, but since it was SO big it was a good amount of work.

Noah was so excited for his Spiderman costume, can you tell? 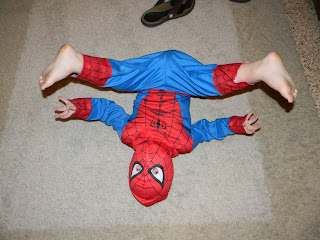 I'm thinking of making Clint sign up for the Next Project Runway STAR! In the words of Tim Gunn "Make it work!"

Posted by Micropreemie Mom at 1:53 PM