My mom was headed to Naples Florida for a few days, so I had to take some days off of work to spend with Noah. During this time I tried to think of things to get done since I'm rarely ever home when I take days off (I'm usually on vacation). Past the usual things like making beds (who has time for that before work? seriously!), doing laundry and sweeping floors I tried to get some errands done.

Over the days I was able to get some Christmas shopping done and wrap them all, say what! All of this sounds like fun stuff for me, so I'll now focus on things I did with Noah.

Noah loves to do crafts, so I'm forever picking up little things here and there for us to do. On my last trip to Michaels, I picked up this turkey kit. It was pretty adorable and didn't require scissors. Noah loves to use scissors, but I'm always worried he will chop off a finger or something...or maybe my chihuahuas tail.

As we were putting the turkey together we noticed that the kit was missing the turkeys eyes! We only had 1 eye, so I tried to tell Noah that he was a pirate turkey but he then said "Well, then where is his patch?"...busted! So our turkey doesn't have eyes. I'm pretty sure that my chihuahua Uneaux ate the other "missing" black eye. 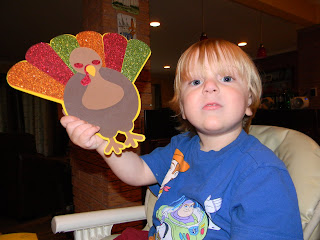 Someone is lovin' their turkey! 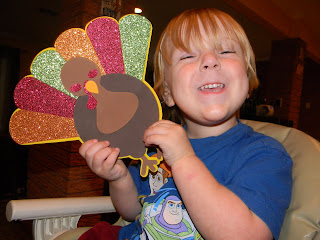 I bought this adorable Thanksgiving shirt for Noah to wear for Thanksgiving. I'm a sucker for anything embroidered or monogrammed so when I saw this I just had to get it. It was my intention to send out a Thanksgiving card to friends and family with a cute little saying (my friend Jenna did it, and it was presh!). However, since I couldn't get any decent shots of Noah it went by the wayside. 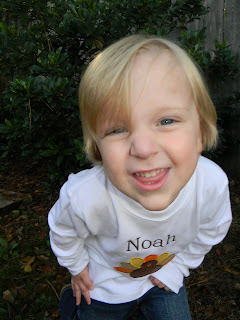 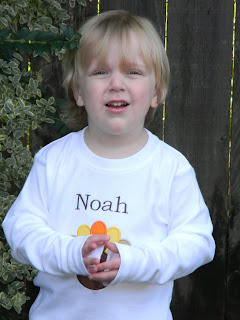 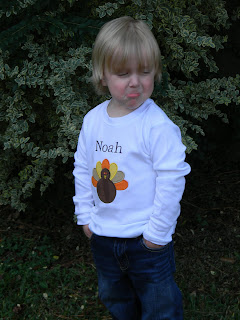 I have no idea who he gets that pout from.

All in all it was a fun few days off of work and I got to spend a lot of time with Noah. He definitely had a great time with me, but towards the end he was ready to get back to his routine with his Gigi.

Posted by Micropreemie Mom at 11:37 AM