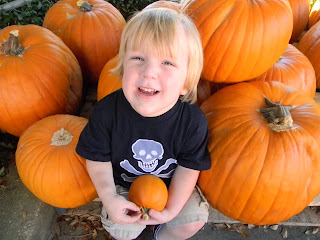 It's only natural that Noah is obsessed with the pumpkin patch, since he is in love with Halloween. One weekend we took Noah to a little local pumpkin patch in a church courtyard. It's obviusly not a "real" pumpkin patch, but I thought this would do to feed his needs.

Once we got to the pumpkin patch all Noah wanted to do was pick up every single pumpkin in sight! Since we had thoughts of going to a "real" pumpking patch, I told Noah to pick out the small pumpkin he needed for school.

This is obviously a very hard task for a 2 year old. Noah was definetly in search for the perfect little pumpkin. As he wandered around the patch, he wore this random hat they had there. It was pretty adorable.

After we found the one, I tried to get Noah to take some pictures. Stay tuned for Pumpkin Lovin' part 2! 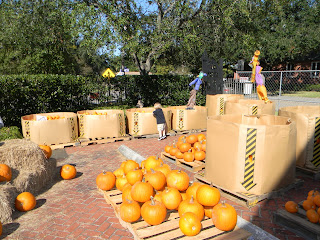 Posted by Micropreemie Mom at 6:57 PM