I've been lucky to have friends who have children (specifically sons) who are around the same age as Noah. As the boys have gotten older, we have been able to schedule more activities for them. We have met for play dates and most recently went to Barnes and Noble for story time.

While we were at the crazy Chick Fila a few Saturdays ago my friend Jenna just blurted out "The boys need to have a pact, you know like the Traveling Pants so they can always be best friends!". For those of you who are unsure about what she is talking about, she is referring to the movie "The Sisterhood of the Traveling Pants".

So, after Jenna's comment it had me thinking how cute it would be if Alton, Noah and Gabe stayed friends forever. For now it's easy, they have no choice but to hang out with each other because we make all their decisions (and Noah just thinks Alton and "Baby Gabe" are about just as cool as his older cousin RJ). 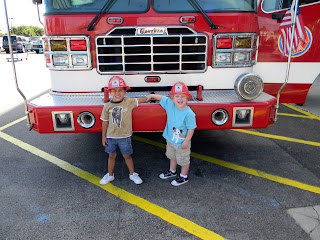 Time will only tell if they will have a pact as strong as those traveling pants, but in the mean time they are enjoying each other and the cool things their Mommy's do with them!

Noah can fluctuate between favorite person. Some days he is totally in love with me and other days he wants nothing to do with me. Currently he is on a daddy kick. However, his #1 all time favorite person consistently for weeks now is his Nanny Mo (my sister).

Noah goes back and forth of what he calls Monique. It used to be Aunt/Nanny Mo but now it's just "neek". On most days Noah gets to see Neek when I drop him off and when I pick him up. As he walks up to the door he starts asking "Momma, Neek here? Neek home?" and once he enters the house he wanders around screaming for her until he finds where she is.

Yesterday Clint went to pick up Noah. Noah was very upset to leave and kept on begging to not leave and to stay with Neek. Clint and Monique tricked Noah saying "Oh, Neek is going to come to the car" to ease Noah from having a break down bigger than "Holy Tantrum Tuesday".

As Clint was buckling Noah up in his car seat, Noah kept on asking where Neek was. As Clint started to crank up the engine he screams "NO, Dadda wait! Neek is coming, Neek is coming!". Clint had to break the news that Neek wasn't coming and they were going home. "WHAT? Neek is coming, just wait! WAIT!!!" Noah screamed hysterically. Clint said he cried and screamed the whole car ride home.

Clint even tried to trick him with getting M&Ms from CVS. "If you calm down, we can go to CVS to get milk and M&Ms" Clint said in his best bargaining voice. "NO, I just want NEEK!" Noah hollered. There was no winning in this situation obviously. Thankfully, I didn't have to witness this tantrum b/c I was at Starbucks drinking a delicious frap and catching up with an old friend.

Once I came home Noah was passed out and Clint told me the story. Clint said "Man, I mean he never wants to see either of us like that" and I agreed. He definitely has a deep love for his Nanny Mo.

This morning I pulled up and Monique was already walking to her car. Noah was so excited and squealed "NEEK!". Monique told me she had to hurry to work this morning. Noah wasn't buying it. "I'll be right in Noah" Neek said. Once we got in the house and Noah realized his Neek wasn't coming in, he lost it.

He ran to the door and opened it up. To his surprise, he saw Neeks car driving away. "NEEK, come back NEEK!" he cried. Noah then started to bang on the glass door and tried to push it open. He was so upset that she was leaving. I had to tell him that she had to go to work and he just didn't want to hear it. The crying and hollering just became worse. Noah then fell to the floor and was kicking and screaming. I told him to calm down and he said "NO, you do it! You calm down" and he pushed me and told me then to go to work.

The terrible 2s + not seeing his Neek = a terrible start to a Friday morning for Noah.

Posted by Micropreemie Mom at 10:08 AM 0 comments

Noah is obsessed with Yo Gabba Gabba. Strangely enough, it's one of the shows I can tolerate (don't get me started on that purple dinosaur, we are not friends).

For his birthday Noah received the Yo Gabba Gabba cd. Every morning we listen to a few tunes. It's broken up by a character song, then a real artist. So, it's not all annoying songs. However, after listening it to every day since February I was so ready for a change.

Luckily volume 2 was just released. Phew! The day it was released I downloaded it off ITunes and we began listening to it every morning. I know he sings along (or tries) to the character songs, but I had no idea he was so attentive to the non character ones since he usually hysterically screams for me to skip it.

Earlier this week I was watching one of my all time favorite movies ever, Sixteen Candles (Jake Ryan, swoooon!). I've never noticed the song playing in one of the scenes (it's the scene when she is filling out the note). Anyway, all of a sudden Noah gets the most alert look on his face.

"MAMA...Yo Gabba Gabba...CAR, we listen to this in the car!" he screamed. At first I didn't get it and just did my normal mom nod to him and smiled. I really had no idea what he was talking about.

All of a sudden, it hit me! The Ting Ting's did a remake to this song. GAH! I couldn't believe Noah realized this before me. We may have listened to this particular song in the car many times over the past few weeks. I can't get over how attentive he is.

It's amazing how things come full circle in the most bizarre ways. My obsession with Sixteen Candles is now related to Yo Gabba Gabba. Go figure! DJ Lance Rock would say "That's Awesome!".

Posted by Micropreemie Mom at 10:41 AM 0 comments

Ever have a time where you just have no interest in listening to someone? Maybe you are having a bad day or you just can't stand the person. So, you think of something totally lame to get you out of the situation. You may fake a sickness, say you have a meeting to run to or act as if you get an urgent email/text.

Well these things aren't so easy for Noah to do at 2 years old. Instead, Noah just pretends that he is sleeping if he doesn't care for what you are saying or asking of him. "Noah, please eat some vegetables" Clint says at dinner and then you glance at Noah and he is "sleeping". In a flash he shuts his eyes, tilts his head to the side and begins to snore. He is now convinced that you think he is indeed sleeping.

I thought this trick of his was something he only did in our house or maybe at his grandparents. But no, Noah decided to pull this trick off at the doctors office a few weeks ago. We were going back to recheck his tubes in his ears. He was a champ for the appointment itself, but after we met up with one of the docs I work for.

So here I am pushing the stroller and everyone is engaging in conversation about Noah. Noah is then asked a question and he pulls his sleeping trick. I almost doubled over in laughter. "What's up with Noah? Is he tired? I guess he needs a nap" my doc said, I had to break the news that Noah was just ignoring him. We all agreed that we all wish we were as cute as Noah to get away with this.

So, if you see Noah and I out and he acts as if he is narcoleptic please take note that he isn't, he is just ignoring you.

Posted by Micropreemie Mom at 11:38 AM 1 comments