They call me Mellow Yellow.... 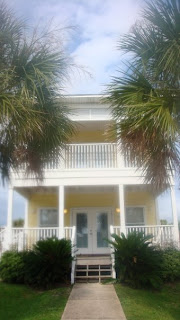 AHH we finally made it to 'da beach! The traffic was TERRIBLE on the way here. Seriously, I felt like we drove forever!
We stopped and had lunch at Cracker Barrel in Pascagoula. Noah had his typical biscuit screaming fiasco. He looooves carbs! When I went to get him out of his high chair he kept on reaching for the plate of biscuits and I kept on pushing it further away from him. Well...last minute as I picked him up he managed to pull the whole plate towards him and get about 3-4 biscuits on the ground. Ahh...sometimes going out to eat is a real pain!
After leaving Cracker Barrel Noah screamed the WHOLE way to Florida. I'm not joking....the whole freakin' way! I saw a Starbucks symbol from the interstate and immediately got off. I seriously needed a cafeeine pick me up for the traffic and the non stop screaming. The tunnel in Mobile was so bottle necked. I swear we sat there for about 30 minutes which is annoying in itself BUT top it off with the screaming.
Anyway, after a long whining drive to Florida we finally arrived. Where our beach house is located it's right off the bridge from the interstate so all we did was just get to the house. "Mellow Yellow" is really cute! The house is yellow obviously, and it has a cute porch. The pool isn't huge but definetly suits us and the beach is only a short walk away.
After dinner the kids played the Wii till 12:30. I can't believe Noah stayed up that long with them. He was having a blast!
Ta ta for now, I'll check back in tomorrow.

Posted by Micropreemie Mom at 9:35 PM