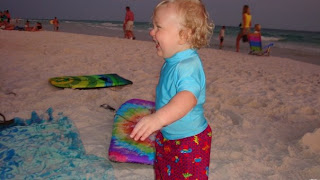 Today we went to the gulfarium. It was awesome! While we were driving there we passed by the Ramada. Tiffany and I (along with our mothers) went there every summer on the last day of school. It brought back a lot of memories. I looked forward to that trip every year. It was s a blast.
Anyway, back to the gulfarium. They had many shows to see. We saw the sea lion show, the dolphin show and the multi species show. I think Noah likes the sea lion show the best. We were up front and he could see them very well. I liked ALL of the shows. They were really awesome. Another favorite was the penguins. They were little penguins and they were really cute. It made me think of Billy Madsion...teehee.
After lunch, we headed to Harbor Walk. It's an outdoor shopping area by the water. It was nice. We had lunch at Poppy's crab trap or something and it was very lousy. Seriously, DO NOT GO THERE! Clint didn't even finish his food, which is so unlike him!
We then came home and changed to head to the beach. Ahh, the beach. I could live at the beach this vacation. We went in the late afternoon again and it was cool and breezy. Noah loves running around in the water and playing in the sand. However, he tries to steal other kids sand toys. I'm not kidding. Noah could be a theif!
Once we got done at the beach we took a dip in the pool. Ahh, refreshing! Tonight Abigail, Monique and my dad went on a fireworks cruise. I can't wait to hear how it went! I wanted to go but the thought of being on a boat for 2 hours with Noah makes me a nervous wreck.
Tomorrow is our last FULL day at the beach, I don't want to leave!

Posted by Micropreemie Mom at 9:55 PM