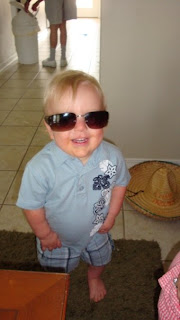 Sunday Noah was up bright and early, even though he was up late partying with his cousins. It amazes me that if he goes to bed at 9 or 12:30 he is still up early! As soon as he woke up, he ran out of his room to see his friends. However, they were all still sleeping.
Since Noah was up so early, we decided to hit the beach. I never remember the beach here in Destin being so nice! The water was so pretty. The beach is a short walk from the house. Once we got to the beach we set up our spot. Clint went in the water to try to catch some waves. They had a few guys on surf boards. The water had a LOT of big waves, it felt great. Noah and I at first just sat on the sand. He played with the sand and his little bucket. We then went to the edge of the water and sat there while we let the water hit our legs. He really liked it...even so much that he tried to eat a bit of sand. Eww!
Once we got back we decided to take a dip in the pool. When we got back, the other crew was just making it to the beach. Everyone had a great day at the beach and swimming in the pool.
We went out to dinner, well we TRIED to go out to dinner. Every place was super packed! Since we have a party of 13 it's not the easiest task to do. We ended up going to the Bonefish Grill. I have went once before and thought it was OK but OMG it was so yummy! The bang bang shrimp were incredible! We sat outside and enjoyed some of the breeze and fresh air. It was a nice dinner.
After dinner, we went cruising. We drove up and down the strip and saw all the touristy things. Big Kahunas water park looked SO much bigger than I remember it. The last time I went was the summer of 2002 and it looks a LOT bigger now. Clint went to one of the many tourist shops that ALL looked the same to get a boogie board. Noah was already asleep once we hit the car so we all couldn't go look so we had to take turns of our tacky tourist shopping.
Noah has had a fever every time I take his temperature. Poor guy. He has an ear infection and is on antibiotics. He doesn't seem to mind though, he is still having a blast! However, I am already burnt! It's ONLY day 2! Oy!

Posted by Micropreemie Mom at 7:36 AM