This blog should have been written weeks ago...so pretend this is a time warp....
We celebrated Christmas with Clint's mom and brother and sister the weekend before we left for Disney World. It was a really great time. Clint made his yummy jambalaya and Clint's mom brought over some really yummy corn and crab soup (one of my fav's).
Noah's "gammie" (I hope I got the spelling right!) gave him tons and tons of toys! His favorite toy (actually his favorite toy of ALL he got during Christmas) is the Fisher Price Ride A Long Lion. He loves it! He hasn't gotten the whole concept to stand behind it and push it but he loves to pull up on it and ride it. It's really cute. 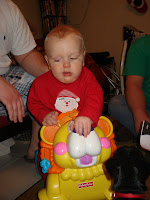 We gave Clint's mom a calendar fully loaded with pictures of Noah and our family from the past year. It was really cool and it was fun to make. I actually just got a code for a free calendar when I bought my new camera...I'm thinking about making one for myself!
When Clint's mom was leaving she gave Clint a piece of paper with a clue on it. We were kinda confused but followed the clues. It was really fun! The clues were like "Noah sleeps here"..."Uneaux's treats"...."Tastes good on toast". It was cute! It lead us to the tree with a stocking with a gift in it. It was very thoughtful and a lot of fun. I don't know how they put all the clues in the house while we were here, it was pretty awesome. 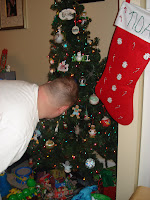 Posted by Micropreemie Mom at 6:32 PM